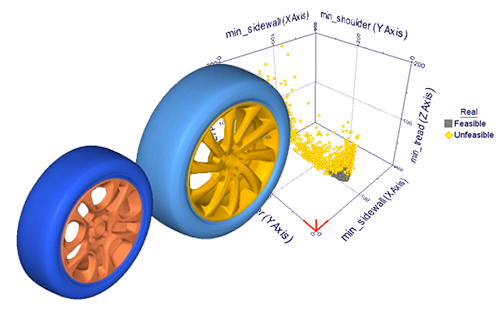 When developing the sub-systems of a vehicle, compromises have to be made among several contrasting objectives. On one hand, one wants to set all sub-systems – such as suspensions – so that they allow efficient and safe handling of the vehicle. On the other hand, comfort cannot be sacrificed too much. Being the support of the vehicle and providing forces necessary to control it, pneumatic tires are one of the most important components. However, it is very challenging to model them due to both their complicated composition and the materials used in their manufacturing process. On top of that, the modeling is done by suppliers and an in depth understanding of the interaction with the vehicle must be attained.

Engineers at CRF, the R&D department of FCA Group were looking for a proper representation of this component to allow them to accurately describe the excitation coming from the road in order to move one step closer to the so called “full-vehicle simulation.” Additionally, developing such a modal model of the tire is of great help when evaluating the performance of supplied components.

By combining modeFRONTIER capabilities with MSC Nastran structural analysis, engineers defined a simpler but still reliable model of the complicated composition and the materials​ of the tires to predict with sufficient accuracy the forces at the hub of the wheel, allowing for more precision in the NVH finite element (FE) analysis​. MSC Nastran was easily integrated in modeFRONTIER through the use of the scripting tool. The platform assisted designers as an automation environment and a multidisciplinary optimization engine for MSC Nastran simulations as well as the other tools involved. FE models were created to understand the forces acting on the tires both in static and rolling conditions. In this way CRF’s designers were able to predict the impact in terms of deformation of the forces acting at hub level and determine the accurate, yet easy to use, methodology to obtain a structural model for the tire.

For other example of the combined use of modeFRONTIER with MSC Software products please visit www.esteco.com.

The James Webb Space Telescope is a highly sensitive instrument that is positioned using a precise optical metering support...

Acoustics, Actran, Aerospace & Defense, Noise & Vibration
No Comments
Launching a rocket into the sky is not an easy thing. There are several thousands of unimaginably complex engineering...

Acoustics, Actran, Automotive, Noise & Vibration
No Comments
When designing an audio device, the most important thing for an engineer to consider is the quality of...