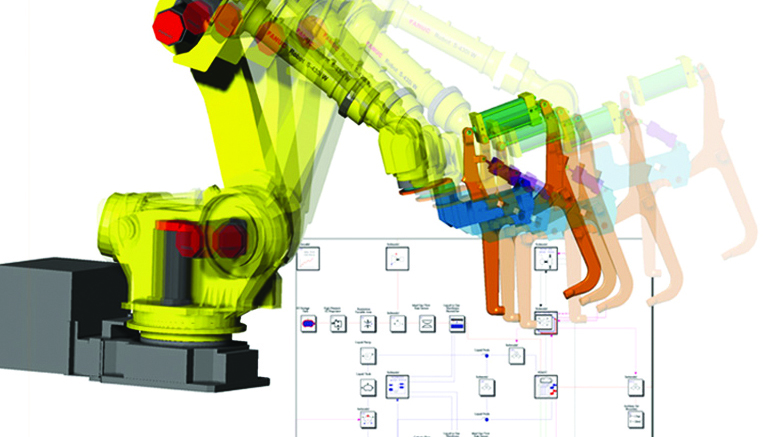 Easy5 is a graphics-based software tool used to model, simulate, and design multi-domain dynamic systems characterized by differential, difference, and algebraic equations. The systems that can be analyzed using Easy5 include mechanical, electrical, hydraulic, pneumatic, thermal, gas dynamics, powertrain, vehicle dynamics, digital/analog control systems and much more. With Easy5, dynamic systems can be modeled on a level that requires no CAD geometry. This is a critical capability for establishing design requirements and verifying system performance.

Easy5 is a 1D system simulation tool, meaning modeling that typically only simulates one spatial dimension (for example, the travel of an actuator or the rotational velocity of a motor). However, this label may seem a bit limiting since Easy5 can solve systems of any dimension as long as the equations describing the systems are known. These can be algebraic, ordinary differential, or differential-algebraic equations.

Easy5 is a block diagram based tool. For time-based simulations, users add blocks that take in signals, perform some mathematical operation on them, and pass the results to other blocks. This is done repeatedly over many very small time steps until the simulation is complete. The user can even create his or her own block that uses custom code. Easy5 automatically generates the system equations from the block diagram. 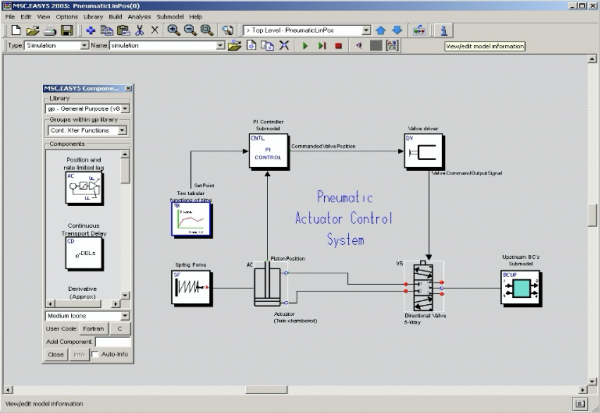 Time-based simulations are only one type of analysis offered in Easy5. There are 14 types in all, including steady-state analysis, model linearization, random analysis, and stability margin calculation. The steady-state solver is especially useful for determining a valid initial operating point or getting system equilibrium values quickly without doing any time integration. Easy5 can also co-simulate with Adams as well as other commercial codes. 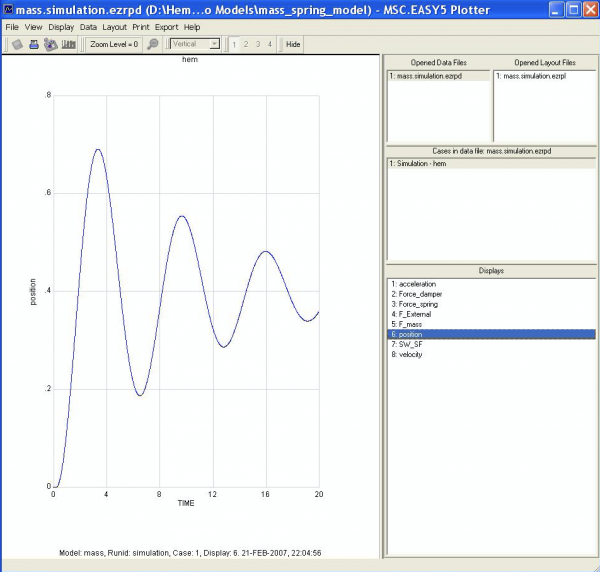 Easy5 has powerful scripting capabilities using its Matrix Algebra Toolkit (MAT). This tool has its own scripting language and allows data generated by Easy5 to be imported into MAT; results in MAT can then be exported back into Easy5.

Easy5 comes standard with a General Purpose library containing hundreds of mathematical blocks, as well as an Interactive Simulation library that allows you to change model states while the simulation is running and monitor results on the schematic. However, what sets Easy5 apart from the competition are its Engineering Libraries. These four optional libraries include:

Using these libraries, an analyst does not have to know the equations behind the components that are being modeled. These, as well as some input/output parameters, are predefined in each block. For example, if you wanted to include a hydraulic actuator in your system, you may simply drag an actuator from the Thermal Hydraulic library component into the schematic and enter parameters, such as bore and stroke. In summary, you would be hard-pressed to find a 1D system simulation tool more powerful than Easy5. For linear or nonlinear, continuous or discrete, Easy5 has you covered.