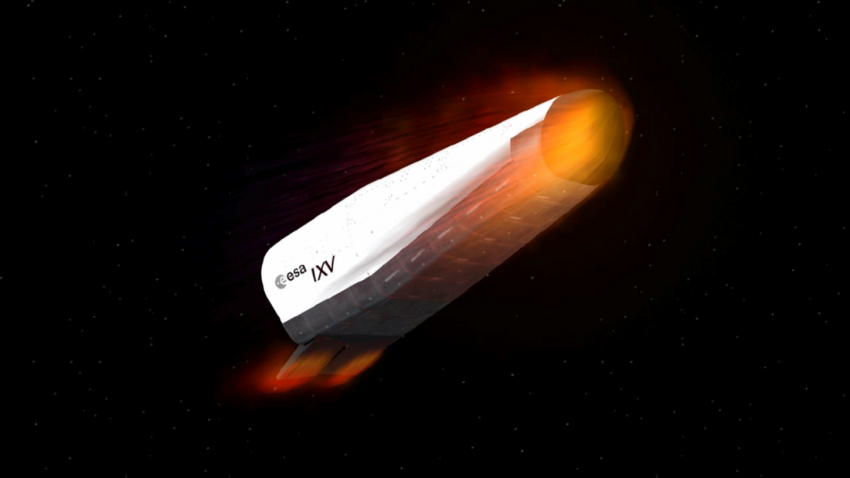 Reusable launchers are recognized as one of the solutions to lower launch costs. Contrary to more traditional expendable launchers, the reusable launchers are able to launch a payload and return part of the structure on the Earth surface. In 2015, ESA launched the Intermediate eXperimental Vehicle (IXV). This vehicle was developed by Thales Alenia Space to serve as a prototype to validate the ESA’s work in the field of reusable launchers.

To make sure that the launcher can be reused, its structure must not be damaged during the launch and landing phases. The structure is therefore designed to undergo vibro-acoustic fatigue due to noise induced vibration of the different hardware parts. In this framework, vibro-acoustic numerical simulation allows to predict the loading of the structure and anticipate its deterioration due to fatigue.

The spacecraft is a wingless, lifting-body launcher designed specifically to withstand the extreme thermo-mechanical environment encountered during re-entry in the atmosphere. Its outer surface therefore consist of advanced ceramic and ablative materials. The outer structure internal parts are made of carbon-fiber reinforced polymers and divides the spacecraft in several sections. These sections host the avionics, the parachute and floating system for landing in water, the control actuators allowing to control the spacecraft during its re-entry, and the propulsion module.

The numerical model of the IXV consisted of the vehicle internal structure modelled with the Finite Elements Method (FEM) with structure modes computed using MSC Nastran. The different systems present in the vehicle are represented by concentrated masses at their center of gravity. A total of 1489 structure modes were extracted up to 700Hz Hz. Modal displacements were output on all parts of the structure where an excitation is applied and at each accelerometer location to be used in the vibroacoustic model. The calculation was run with the Actran software up to 650 Hz with a frequency step of 5Hz. The total computation time for this model was 7 hours and 30 minutes on a single CPU. The vibro-acoustic testing was performed in the ESTEC reverberant chamber with all usual considerations, such as decoupling the spacecraft structure from the ground and orienting it such that overpressures due to reflecting waves are minimized. The noise level in the reverberant chamber is controlled through 15 control microphones located around the spacecraft. Tests are performed in Protoflight condition leading to an overall Sound Pressure Level (SPL) value of about 141 dB. 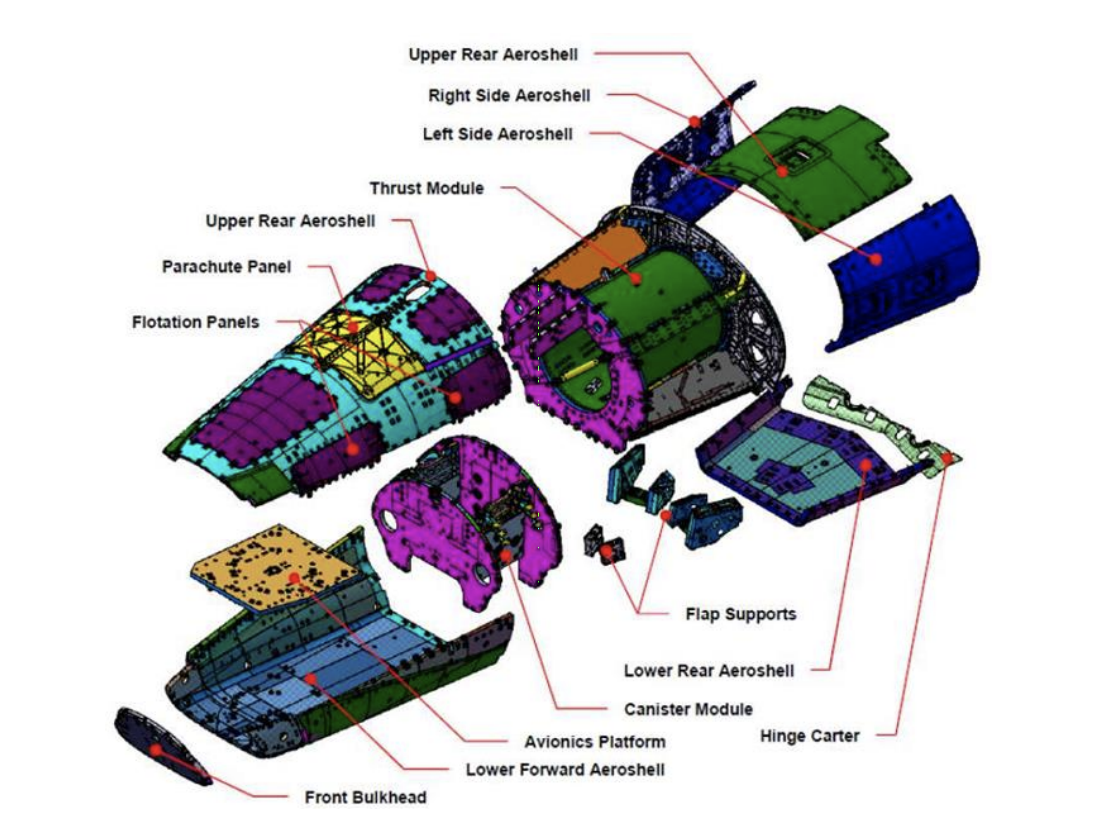 The response of the structure to this acoustic excitation was recorded by means of accelerometers placed at several critical locations on the vehicle. These locations correspond to attachment points of critical components, equipment and avionics. The numerical simulation allowed defining an excitation that is precisely corresponding to the test specifications. There was a small deviation between the actual sound pressure level in the reverberant room during the test and the target value defined by the specifications. The numerical model is run two times with both loading according to the specifications and according to the recorded average noise level on the control microphones. A very limited deviation was observed on the structure acceleration results between results of the two calculations. Differences are mainly shown around 450 Hz where the difference between the value recorded at the control microphones and the test specification is the most significant. This observation can be done on all accelerometers location present on the numerical model. 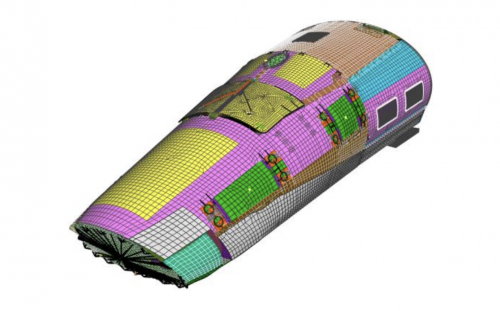 Considering the different assumptions made on the numerical model regarding the structure description (in order to create a finite element model), the excitation and the damping, results computed with the numerical model solved with MSC Nastran and Actran are in line with experimental results. Considering the results accuracy and the limited time required to perform the model pre-processing and to compute the model results, this study therefore validates this approach for low frequency prediction of acoustic fatigue for spacecraft vehicle structure at Thales Alenia Space.

The method was validated by Thales Alenia Space for the IXV reusable spacecraft against experimental results based on acceleration levels measured in a reverberant chamber. The comparison between measured and computed structure response is well in agreement for most accelerometer locations on the structure for both in-plane and out-of-plane accelerations. Through this validation work, assumptions on the way to apply the random acoustic excitation and on the validity of an analytical modal damping model were validated. The presented process is well suited for predicting the deterioration of spacecraft structures due to acoustic loading and will be applied to future vehicle studies.