Identifying and addressing vibration issues early in the design process 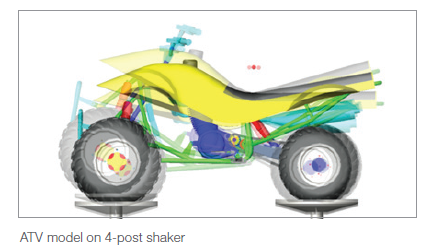 A universal problem when optimizing noise and vibration is that it often conflicts with durability or cost. Multi-body dynamics helps balance these competing requirements early in the design process by addressing key vibration issues facing engineers, such as “will excitations in one part of the systems interaction with another part of the system?” MBD makes it possible to analyze the effects of hydraulics, controls and other subsystems and take systems to different operating points to analyze the vibratory behavior. Users can perform system level vibration analysis including normal modes analysis and frequency response studies. Either time domain or frequency domain inputs can be used with the same model. For example, you can apply an input vibration to a hydraulic control valve and see the effect of changing cylinder pressure and boom movement on the frequency response function plots and animations.

A leading appliance manufacturer used Adams to achieve a 70% reduction in the vibration of a washing machine. The company’s engineers built an MBD model of the washing machine and used it to evaluate vibratory behavior. By manually generating 60 different iterations they were able to reduce vibration by 35%. Believing that further improvements were possible, engineers used Taguchi methods to design an experiment that evaluated another 4374 cases. This led to doubling the reduction in vibration. Animations that clearly show the reduction in vibration from the old to the new design were used to convince management of the need to make the change.