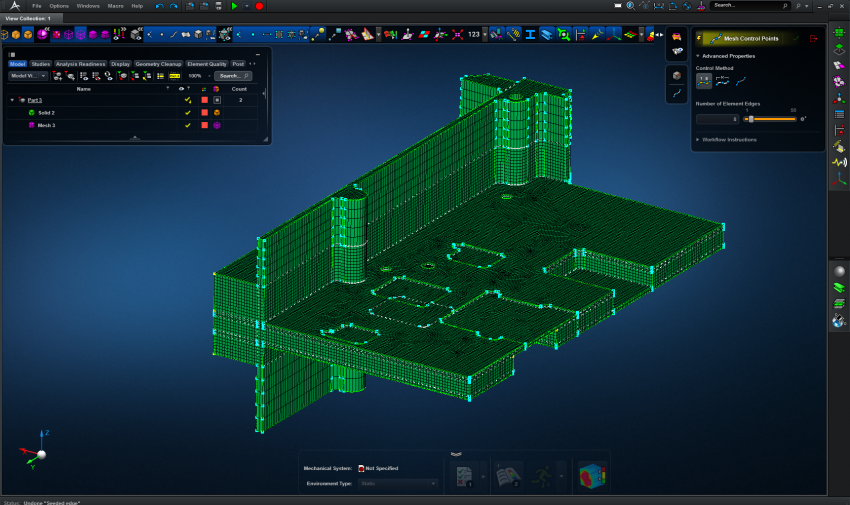 Lacking a productive tool for taking advantage of hex mesh in product development missions, engineers reviewed and benchmarked MSC Apex versus their legacy workflow and tools, and found quite a few benefits from using the new workflow.

Northrop Grumman Mission Systems specializes in the development of military radar systems and sensors for aerospace. These technologies are used in a variety of advanced aircraft. Other Mission System solutions include security systems for different industries. The structural analysis group based in San Diego, California, specializes in the design and analysis of electronic assemblies and subsystems used in air and ground applications.

There are multiple failure mechanisms engineers must consider in aircraft design, and one of the most critical is structural stability. Due to cost and schedule requirements, Engineers often need to investigate the structural stability of their designs by using virtual prototyping. They need to be both efficient and accurate when completing their tasks by performing finite element analysis (FEA) on the structures. Many analysts favor the Hexahedral mesh (Hex mesh) because it requires fewer elements, resulting in less simulation time and more accurate results than a tetrahedral mesh. However, Hex elements are not widely used due to the extra cost (measured in engineering working hours) needed to create them. In this case study, users wanted to create a 20-node hexahedral mesh with their legacy FEA software. However, their legacy tool had multiple limiting factors that make the use of hexahedral elements impractical.

Two of the most common issues are described here – defeaturing geometry and creating the fully-connected hexahedral mesh efficiently. Defeaturing geometry and preparing it for a hexahedral mesh was the first hurdle to creating mesh-ready geometry. Before a mesh of either tetrahedral or hexahedral elements is constructed, the geometry must be idealized. The idealization process is elaborate, but one critical step in the process is identifying and removing geometric features such as fillets, pinholes, and chamfers. In the legacy workflow, users lacked a way to quickly and easily identify and defeature their geometry, which required them to use a separate software application, CATIA v5, to perform the defeaturing. This then led to a back-and-forth workflow between the geometry software and meshing tools, making the entire process inefficient and time-consuming. The next limiting factor in hex meshing is the complexity of the step-by-step meshing process itself. Hexahedral meshes are limited to simplified and regular geometry – but in the real world, especially on aerospace components, simplified geometry isn’t always readily available. A hexahedral mesh is achievable for most cases, but the process involves partitioning the complex geometry into simpler 3D geometry blocks that are “hex mesh friendly.” The legacy pre-processing tool available to users made the hex meshing process prohibitively time-consuming since it required a one-by-one, cell-by-cell hex meshing process. This impracticality prevented users from widely creating hex mesh for simulations and therefore, led users to use the less preferred tetrahedral mesh. 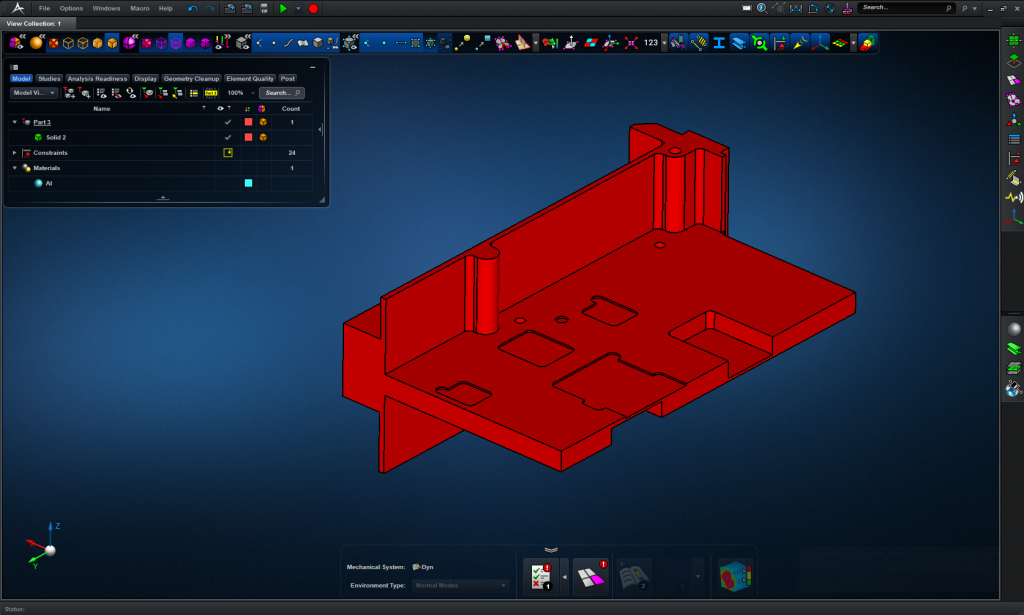 The benchmark geometry in MSC Apex

The engineers performing this task reviewed and benchmarked MSC Apex versus their legacy workflow and tools, and found quite a few benefits from using the new workflow. The first benefit they found was the Geometry Cleanup & Defeaturing toolset available in MSC Apex. These features allowed users to do both generic and detailed defeaturing in preparation for creating a solve ready mesh. Two differentiators that users preferred are referenced here. One of them is the integration of the Parasolid geometry kernel into the MSC Apex platform, adapted and developed specifically to meet the needs of structural analysis engineers. The other is the automatic defeaturing method which made defeaturing quick and easy and allowed users to use fewer tools to finish the task, thus saving time in the overall analysis workflow. The second benefit they found was the suite of generative updates and meshing toolsets in MSC Apex that allowed for a fully-connected, solve-ready hex mesh to be achieved more efficiently. The 2.5D Color Tool visually displayed the segments that were hex mesh friendly and the ones that still needed to be worked on.

Moreover, if a certain section of the geometry was giving them trouble, users used the Hex Mesh Diagnostic Tool to give them immediate feedback on the issues the geometry experienced and how to remedy the situation so a hex mesh could be achieved. The Feature Mesh Settings Tool allowed users to control and customize their meshes around features, such as 3D holes. Also, MSC Apex’s meshing algorithms allowed users to click on meshable domains one at a time, or select them all at once, and a fully-connected hex mesh would be created. Last but not least, when changes to the geometry were made after the mesh was already created (such as going back to defeature a fillet or pinhole that was missed), the mesh would automatically update to the new geometric feature. The final benefit our users identified during the benchmark was the Analysis Readiness capability in MSC Apex. Once a hexahedral mesh was produced, it could immediately be verified for continuity and solver validity. Since a run-ready MSC Nastran solver deck was the “finish line” for each of the finite element models, the Analysis Readiness tool helped users to quickly detect and fix potential issues in the solver deck before running in MSC Nastran, and thus gave them “first-run success” for simulations. 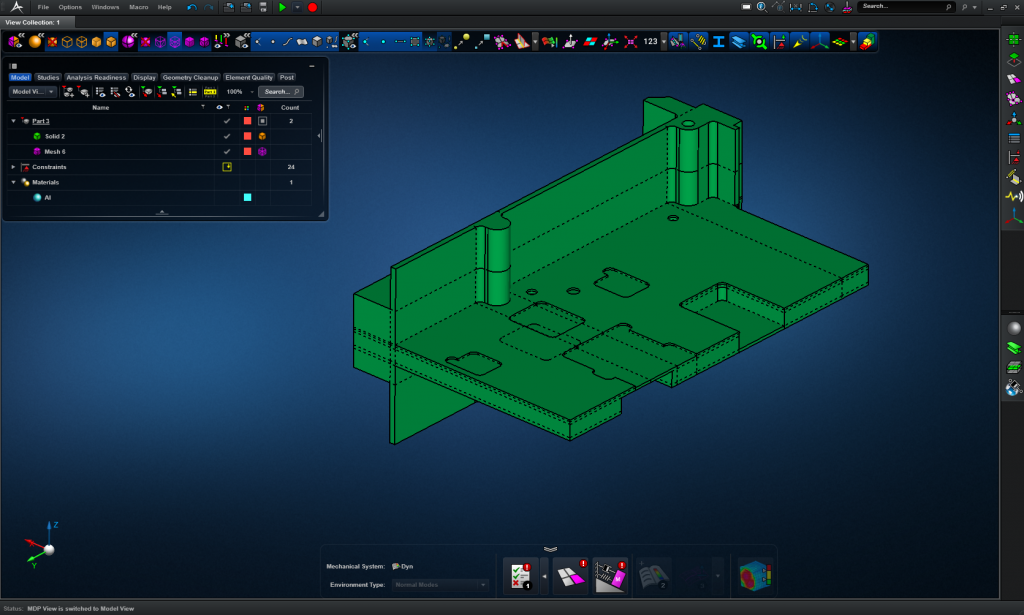 The benchmark geometry that is mesh-ready

After the benchmark workflow was completed, our users found that the pre-processing for MSC Nastran was reduced from over 16 hours with their legacy workflow to approximately 7 hours with MSC Apex. Due to these time savings, the benefits of hexahedral meshes were now attainable to engineers within their current engineering schedules.

Why MSC Apex is the No. 1 CAD Clean-Up Tool of Choice