For our flagship Finite Element Analysis (FEA) software, MSC Nastran, development never stands still. It’s used in every industry in many modes, providing robust and precise results for anything from composite and mixed material analyses (NAS113) to topology optimization (Sol 200). The innovation takes place in the continuous refinements, new features and core optimisations that our development team makes to address your priorities.

Andrzej Pietrzyk, Method Development Manager for NVH CAE at Volvo Car Corporation was a proponent for GPU acceleration. In testing this release he commented: “Leveraging the GPU’s for dynamic analysis using MSC Nastran 2019 Feature Pack 1 version at Volvo presents substantial savings in run time – up to 50% faster for the runs extending to high frequency. GPU support is a highly promising development path for MSC Nastran”.

Easier ways to account for heavy fluids
Creating an effective model to understand how the fluid within a structure behaves can be challenging. To understand how such a system behaves together requires a  modal analysis involving both time domain and frequency domains. 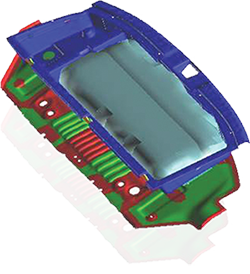 We constantly work with OEMs directly and enable them to incorporate their engineering workflows into our product, and that is why MSC Nastran remains the world’s leading finite element analyses software after 50 years. It doesn’t get old. With MSC Apex, our all-new CAE environment, engineers that have never used FEA before can also get started while specialists may choose to using the powerful and familar Patran pre-processor.