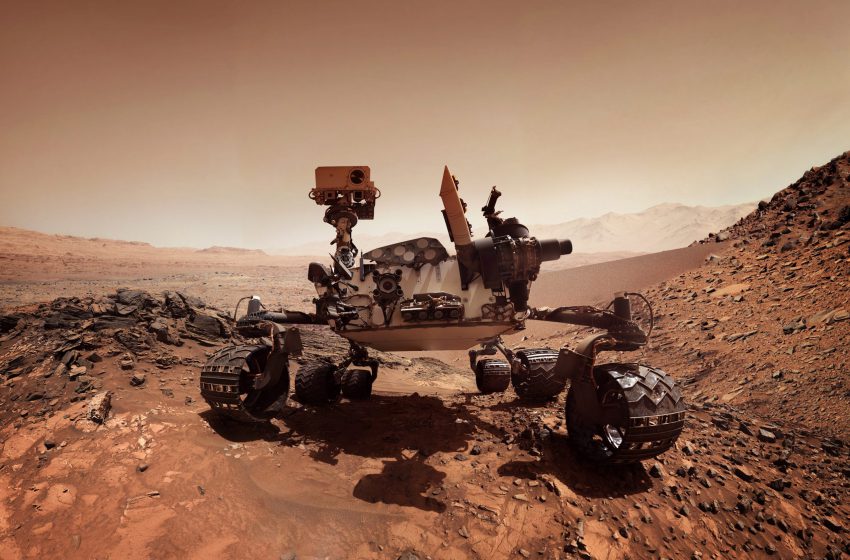 Let’s all admit we earthlings have trouble getting from Point A to Point B sometimes. Flashback to that road trip that went nowhere, that trip to the mall to pick your favorite shoes that turned into an Indiana Jonesque exploration to locate the shoe store, that romantic rendezvous that involved the wrong coffee shop, etc. Now imagine Point A was on Earth and Point B was on Mars, and you were looking for alien life. I am waiting…..lean back…close your eyes…… and imagine…really imagine….. typing Jezero Crater, Mars as the destination into your favorite GPS navigator. (Jezero, by the way, is Slavic for a lake, probably alluding to the possible signs of life that NASA think might exist on that crater.) 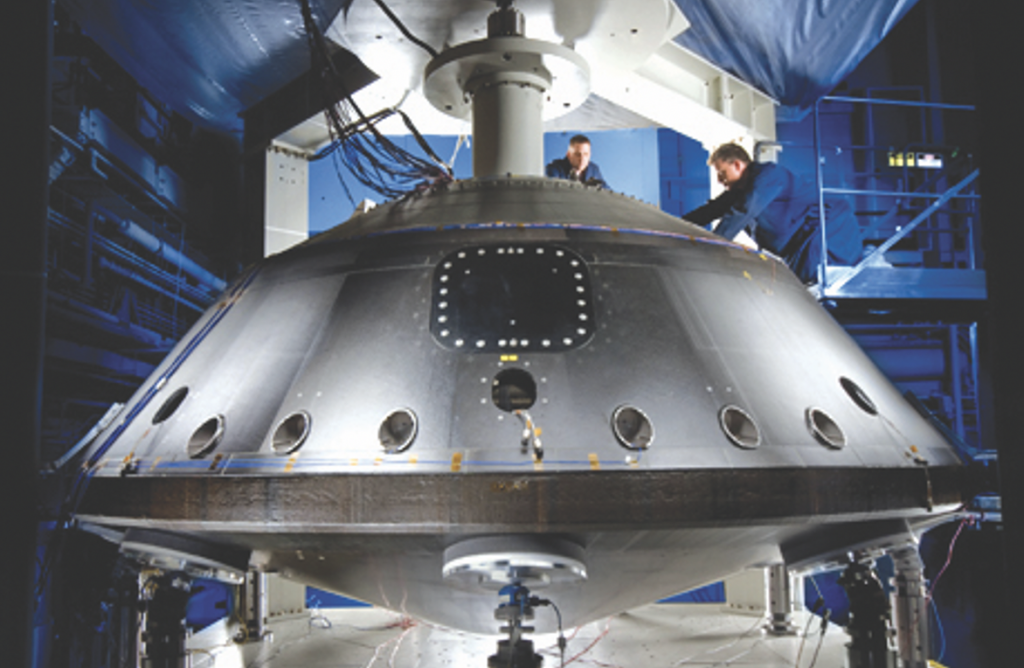 Landing Perseverance on Mars was an astounding achievement. More so, when viewed through the lens of natural challenges, the effort was baffling. First, Mars is far, really far, and getting there is hard. Space can be unwelcoming on this 200 million mile journey, debris, solar flares, you name it. Navigational errors can be catastrophic, especially when you have a specific landing spot on a large red planet in mind. If getting there is hard, landing the rover on Mars and ensuring it operates is n-times harder. Mars is not looking to roll out a welcome mat. (“Hey, earthling contraption, good trip? Glad you are here; how about a coffee, a refreshing lemonade, perhaps? By the way, our transportation people cleared out a straight-line path over here. Explore away.”). Nope ….not happening. 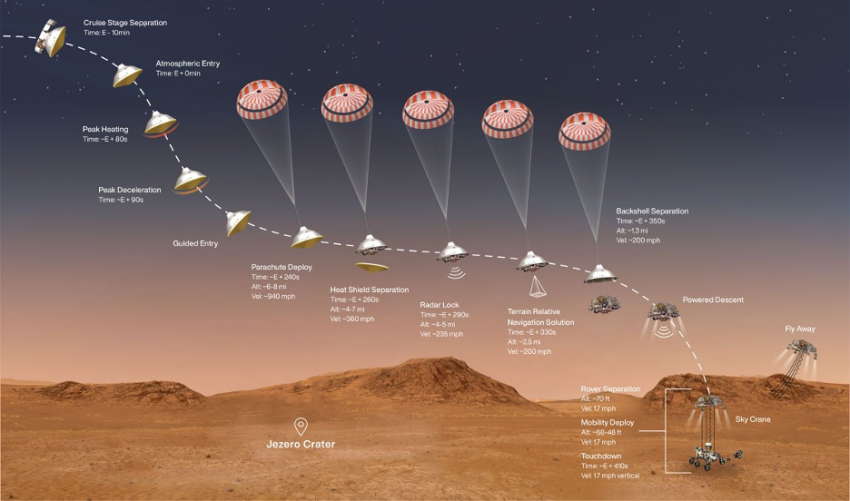 The Entry Descent and the Landing phase (EDL) of the rover took about 7 minutes to accomplish. It takes 5-20 [1] minutes for a radio signal from Earth to reach Mars. A signal to the rover transmitted at the beginning of the landing phase would most likely not get to it until it was on the surface. The success of years of manual effort came down to a few minutes when the rover ironically operated autonomously.

When the spacecraft entered the Martian atmosphere, it traveled at 20,000 km/hr [2] and heated up to 1300 degree C/2370 degree F on entry. Fun fact- the shell that protects the rover during the descent used a mixture made out of phenol [3]- from a household disinfectant to a thermal shield, phenol certainly has come a long way. As the spacecraft enters the Martian atmosphere, it encounters a familiar nemesis- Turbulence. By its very nature, turbulence is chaotic, hard to predict, and likely caused the spacecraft to go off course. The thrusters on the spacecraft would have then activated to manage any course corrections required by turbulence intelligently. All this in under three minutes. 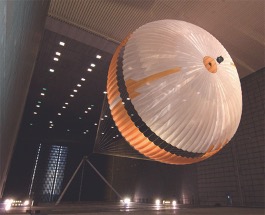 The thrusters and the drag on the spacecraft during entry would have reduced the speed down to about 940 km/hr, still too fast to land a rover on an alien terrain. At this stage, the spacecraft deployed a giant 21-meter parachute [3] (size of a cricket pitch or a little league baseball infield) to slow down further. Previous Mars missions deployed the parachutes after the spacecraft reached a certain velocity. Perseverance used a technique called “Range Trigger” that released the parachutes depending on the distance from the target [4]. When the spacecraft is 2 km above the surface of Mars and traveling at 320 kph, the parachute is released, and then an iron man-style jetpack takes over. The jetpack guided the rover away from the falling parachute and slowed it down further. When the rover was 20 m above the surface of Mars, the final Skycrane phase of the EDL was activated.

In a true Tom Cruise in Mission Impossible-style maneuver, the rover was dangled from the hovering descent vehicle using three cables. (Well, why not keep the thrusters deployed all the way to the surface and land the rover that way? Firing the thrusters too close to the surface of Mars could result in debris that could damage the rover [5]). Over a period of 10 seconds, the Perseverance was lowered using a 6.4 m cable. Once the spacecraft sensed that all six wheels had impacted the surface, it detached the cables, released the rover, and flew off to crash safely at a distance. 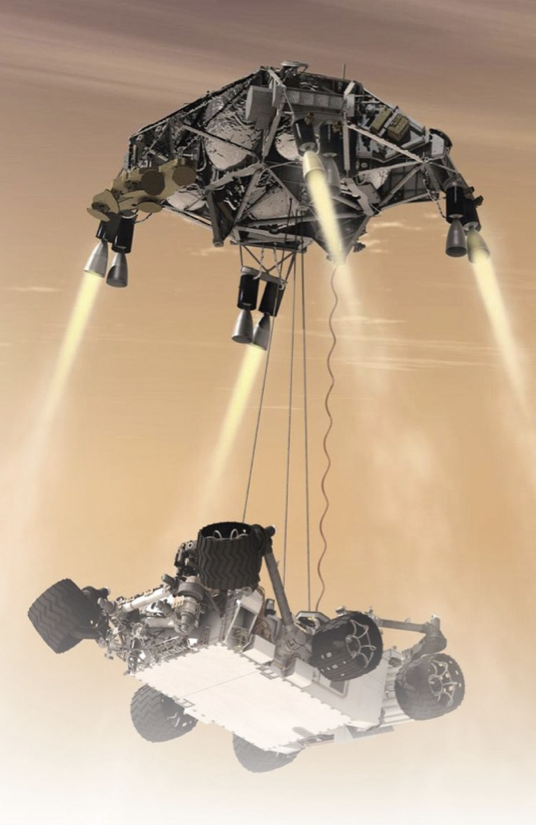 As you can tell, it is impossible to replicate Martian’s gravity on Earth and test the Skycrane out. Also, given the variability in parameters involved, a single test would certainly not represent all potential outcomes. Enter Adams. JPL collaborated with ATA engineering to create Adams models to simulate the SkyCrane[6] and predict the mechanical loads on the rover during the Skycrane phase using a combination of analytical Adams models and statistical methods. These models were an extension to JPL’s models to support the Curiosity Rover program [7].

When mechanical assemblies are simulated using models, simplifying assumptions such as assuming some parts are entirely rigid are made. The choice of either a flexible or rigid representation of a part dictates the accuracy/fidelity of the model. Completely rigid assemblies lack the required level of accuracy but are faster to solve. The Curiosity rover was modeled to a high level of fidelity, using a model that included many flexible elements, with added physical detail such as nonlinear stiffness and damping characteristics. The Perseverance model improved on the model for Curiosity. 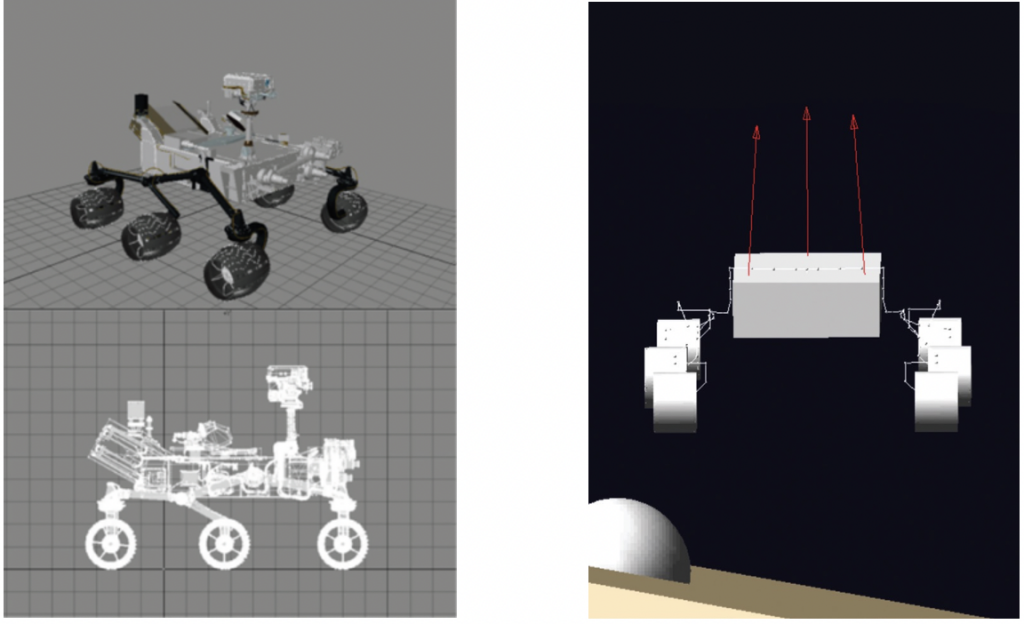 Specifically, engineers at NASA  made improvements to the wheel and cable models. A new flexible representation of the wheel resulted in better load and flight predictions as compared to legacy approaches when compared with test data. Adams models were also used to understand asymmetries in mechanical loads during the rover deployment, observed during drop tests. During the descent phase, the rover the goal is to achieve perfectly vertical deployment. Any asymmetries in loads would result in the rover rolling and pitching, which is not ideal. Adams simulations were able to identify the source of these asymmetrical loads and prescribe a corrective solution.

The Adams contribution to the Rover program described in the ATA-NASA/JPL represents the core value simulation offers to product development. The ability to replicate conditions that would be impossible to replicate in physical tests, test multiple different configurations without building a prototype for each, and arrive at a truly optimized mission-critical design. Most importantly for MSC Software and our customer base, it reinforces the core value proposition of Adams, the ability to ideate and innovate on huge scientific challenges and literally – go where no man has ever gone before.