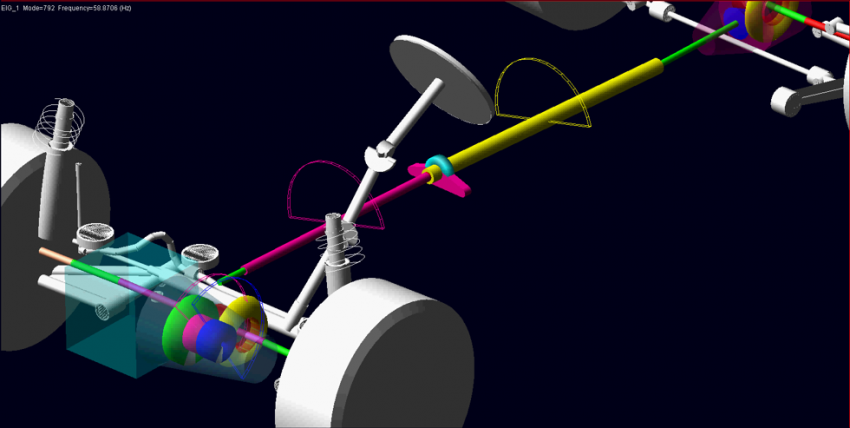 Today's vehicle and powertrain engineers face increasing challenges to meet fuel economy and drive quality targets, while at the same time keep vehicle cost reasonable. Many of the new engine technologies designed to improve fuel economy create difficulties for the noise, vibration, and harshness (NVH) engineer, whose job it is to assure a certain level of comfort for the occupants.

To predict these trade-offs earlier in the design process, Gamma Technologies has teamed with MSC engineers to implement a direct cosimulation of their two software tools, GT-SUITE and Adams, respectively. This new cosimulation link allows virtual analysis of complete vehicles, including the detailed, predictive powertrain from GT-SUITE, and the predictive 3D chassis models from Adams.

To demonstrate the new methodology, GT and MSC teamed with Ford Motor Company. To evaluate the trade-offs of fuel economy and NVH, a 1.6L GTDI engine model with a predictive torsional damper and torque converter model in GT-SUITE was combined with a six speed, AWD driveline and chassis model in MSC Adams. In an effort to quantify the effect of hardware and control on fuel economy and NVH, three different torsional damper types were used, with various levels of torque converter slip, and the behavior the models was evaluated under acceleration at a high engine load in fifth gear.

By providing a crank-angle resolved torque from the engine into the driveline, torsional resonances were excited, causing an increase in torsional vibration, measured at the output shaft of the transmission. With increasing levels of torque converter slip, these resonances were more effective damped, as shown in the figure below. 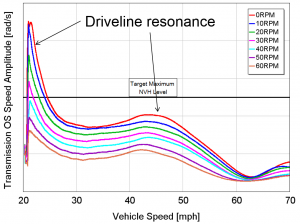 From observation it can be seen that a locked torque converter with 0 slip will not meet stated targets. Therefore, at low speeds, the torque converter clutch is unlocked to allow slip with a conventional arc spring damper. However, this slip will degrade fuel economy, as shown in the below figure. Due to the negative fuel economy impact, other damper types were also evaluated. 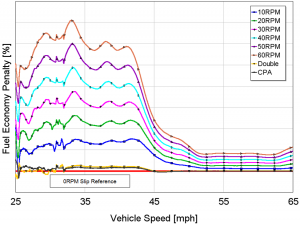 Compared to the locked 0 slip reference, higher slip amounts have a clearly detrimental effect on fuel economy. However, the damper architecture itself does not greatly influence the fuel consumption, as indicated in the above plot. Here it can be seen for the "Double" and "CPA" types of dampers, the effect on fuel economy is minimal. Despite the fact that the damper architecture itself may not affect fuel economy, it may affect torsional vibration isolation.

Such studies are critical in evaluating multi-objective system optimization, where fuel economy, NVH, packaging, and cost need to be optimized together.

Impact on a Stiffener for Lower B-Pillar

L&L Products is a provider of individual and innovative engineering solutions to the automotive industry and is known for...