When you are working with a structure that is modeled with either plate or solid elements, it is quite common that you may want to look at either the printed output or contour plots of the element component stresses. If this is the case, extra care must be taken on your part to ensure that the component stresses, which you are evaluating, are output in some consistent manner.

Consider a simple problem as shown in Figure 9-25. (See Install_dir/mscxxxx/doc/linstat/plate3.dat) This plate, which is 0.1 inch thick, is subjected to a uniaxial tensile load of 1 lb/in, and the boundary condition is as shown in Figure 9-25. This model is represented with a 3 x 3 mesh of CQUAD4 elements. If the elements are connected in a manner as shown in Table 9-3, then all the element sx values are in the direction of the applied loads. In this case, sx  = 10 psi for all nine elements. On the other hand, if you were to change, for instance, the connectivity order for element 5 from grid points 6-7-11-10 to 7-11-10- 6, the component stresses and would be swapped. Note that this is the only difference between Table 9-3 and Table 9-4. However, if you are not aware of it and you are making a contour plot of sx, the results will be quite different for the two cases. 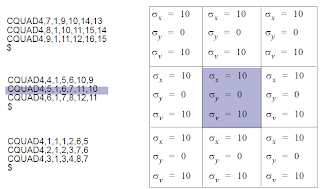 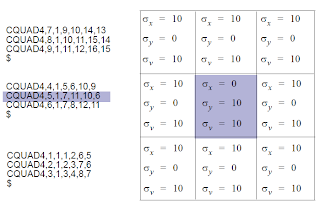 To avoid this type of surprise, it may be easier and probably more meaningful to look at the invariant stress quantities, such as Hencky-von Mises stresses, rather than the component stresses. The grid point stress (GPSTRESS) option in MSC Nastran offers you another alternative. The grid point stress option calculates the stresses at the grid points from the adjoining plate and solid elements in a coordinate system defined by you.

By default, stresses are output at the center of each of these elements and also at the vertices of the CQUADR, CQUAD4 (with corner option), CQUAD8, CTRIAR, and CTRIA6 shell elements as well as the CHEXA, CPENTA, and CTETRA solid elements. This default output is not universally satisfactory because in the case concerning the surfaces of the CQUAD4 (without corner output request) and/or CTRIA3 elements, you often have a requirement for more accurate stress values at the grid points. However, the vertex stresses generated for these elements that connect to a common grid point are often not identical. These deviations are most pronounced with a crude model and converge as the model becomes more detailed. The option described in this section provides a rational method that yields reasonable and unique stresses at each vertex grid point in surfaces or volumes defined by you.

Two methods are used to calculate grid point stress components for plate and shell elements-namely, topological and geometric, with topological as the default method. The topological method involves the averaging of stresses at a grid point due to the contribution of the elements directly attached to this grid point. This contribution does not include the effect of the element size. On the other hand, the geometric method accounts for the element size based on the numerical technique of least squares. If the results are substantially different when using the two different methods, it may be an indication that your model is not fine enough. In general, if your model is fine enough to capture the stress gradients, the two methods should yield similar results.

A single, simplified, topological method is used to calculate grid point stress components in volumes containing solid elements. However, prior to a discussion of these methods, it is necessary to define the four categories into which grid points are divided. These definitions are important for CQUAD4 (without corner output option) and CTRIA3 elements since the stress averaging method used depends on the type of grid point. However, they have very little meaning for CQUAD8, CTRIA6, and CQUAD4 (with corner output option) since the stress averaging is performed the same way regardless of the type of grid points for elements with vertex stresses. 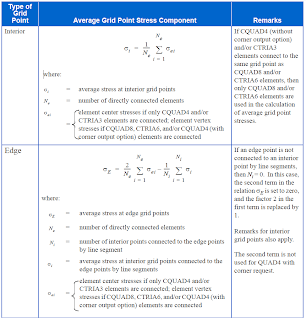 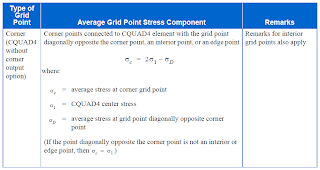 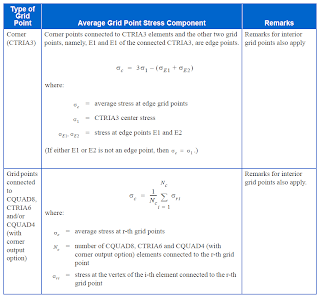 In the geometric method, grid point stresses for points that connect to CQUAD8, CTRIA6, and/or CQUAD4 (with corner output request) elements use the average of the element corner stresses. If CQUAD4 (without corner output request) or CTRIA3 elements connect to these points, their influence is not considered. The geometric method for the determination of average grid point stresses that connect only to CQUAD4/CTRIA3 elements utilizes the numerical technique of least squares.

Exception points are defined as grid points at which stress discontinuities may occur. Such discontinuities may occur due to a substantial difference in slope between adjacent elements directly connected to the same line segment or if more than two elements are directly connected to the same line segment. Figure 9-26 is an example of such a situation. Grid points 1, 2, 3, 4, and 5 are examples of exception grid points.

Note that this situation is geometric rather than topological in nature and is, therefore, only considered under the geometric interpolation option.

Since exception points are defined as grid points at which stress discontinuities may exist, it is conceivable that a computed average grid point stress at an exception point may be different for each of the directly connected elements. However, it is more common to find that a subset of the elements, which are directly connected to an exception point, forms a subsurface on which stresses may be considered to be continuous. A unique average grid point stress may then be computed for the elements of the subsurface. For the problem shown in Figure 9-18, you may consider creating two subsurfaces-one subsurface consisting of elements within the shaded surface and another subsurface consisting of elements within the unshaded surface.

As stated previously, each element stress component (independently of all other stress components) is transformed into the output coordinate system before averaging. It is necessary that this output coordinate system vary slowly over the surface in order for the interpolated stresses to be accurate. This approach is certainly valid for stress interpolation over elements that are in a common plane, and it should be adequate for engineering analysis when the difference in slope between adjacent elements is small. If this slope is not small, it is suggested that you break them into multiple surfaces or volumes. When the elements do vary substantially from a smooth surface, you must utilize engineering judgment relative to the accuracy of the resultant stress data.

A sample of the grid point stress data recovery option is shown in this section.

The following Case Control commands are used by the grid point stresses:

Note that if grid point stress data is desired, an ELSTRESS (or STRESS) request for all elements in the surfaces or volumes of interest must be included in the Case Control Section. This request is in addition to the GPSTRESS request. Such requests cause the output of element stress data as well as grid point stress data. If the printed output of element stress data is not desired, the requests “ELSTRESS(PLOT) = x” or “STRESS(PLOT) = x” may be used. In the model shown in Figure 9-25, if grid point stresses are requested for grid point 11, then element stresses must be requested for a set that includes at least elements 5, 6, 8, and 9. Furthermore, the set of elements in the SURFACE definition must also include elements 5, 6, 8, and 9. In this example, if one of the elements that is connected to grid point 11 (e.g., element 6) is left out in the SET definition, then User Warning Message 4621 is issued. The GPSTRESS values calculated in this case may be meaningless.

If postprocessing of grid point stress is desired, the parameter PARAM,POST,x is needed in the Bulk Data Section. There is no other special requirement.

Again, the model in Figure 9-25 is used for this illustration. In this case, you may want to have two separate surfaces. The first surface contains elements 1, 2, 4, 5, 7, and 8; the second surface contains all elements. Part of the input file is shown. (See Install_dir/mscxxxx//doc/linstat/gpstress.dat) 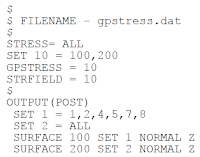 In the above example, surface 100 contains elements 1, 2, 4, 5, 7, and 8 that were referenced by set 1. Surface 200 contains all of the elements that were referenced by set 2. The element positive normal is in the direction of the z-axis of the basic coordinate system. By default, the grid point stresses are transformed to the basic coordinate system. The grid point stresses are called out by the GPSTRESS command, which points to set 10, which, in turn, points to surfaces 100 and 200. Element stresses are requested for all of the elements, which, of course, encompass elements 1, 2, 4, 5, 7, and 8. The STRFIELD command is required to generate postprocessing data for your graphic package. A partial output of a typical grid point stress is provided below.

All of the content in this blog post has been directly extracted from Chapter 9 of the MSC Nastran 2012 Linear Static Analysis User's Guide.