It is with heavy hearts that we announce the passing of Dr. Richard H. MacNeal, co-founder of MSC Software and MSC Nastran, at the age of 94. Dr. MacNeal pioneered the development of engineering software and leaves behind 54 years of technical contributions to the global Computer Aided Engineering (CAE) community and a loving family. Without Dr. MacNeal’s work, MSC Nastran, and the CAE industry would not exist. Without his contributions Finite Element Analysis (FEA) simulation software tools would not have been brought into fruition. His work inspired a generation of innovators and engineers that ultimately laid down the the foundation for which MSC stands today.

Below is an excerpt from The First Twenty Years, written by Dr. Richard H. MacNeal that highlights the origins of MSC Software and the development of CAE software.

“During moments of triumph the road ahead shone broad and straight, and after failures it seemed to vanish, but the lessons learned in rediscovering the path were worth at least as much as the gains provided by our successes. Both the lessons and the successes contributed and both should be given recognition.

How had that achievement come about? It was partly attributable to the revolution in electronics which brought the triumph of the digital computer. But Bob [Robert Schwendler] and I were not in the mainstream of the computer revolution in 1963. All of our experience was with one of the older methods that the digital computer displaced. Partly from necessity and partly through events and relationships which chance provided, we soon found ourselves enmeshed in the design of a digital computer program that would bring the promise of the electronic age to our chosen field, engineering mechanics. Necessity and chance were not the only agents. The insight we had into the needs which the digital computer could fulfill gave us the determination to be at the forefront of the work. That determination has not left us and now it is a permanent part of the Company’s psyche.” 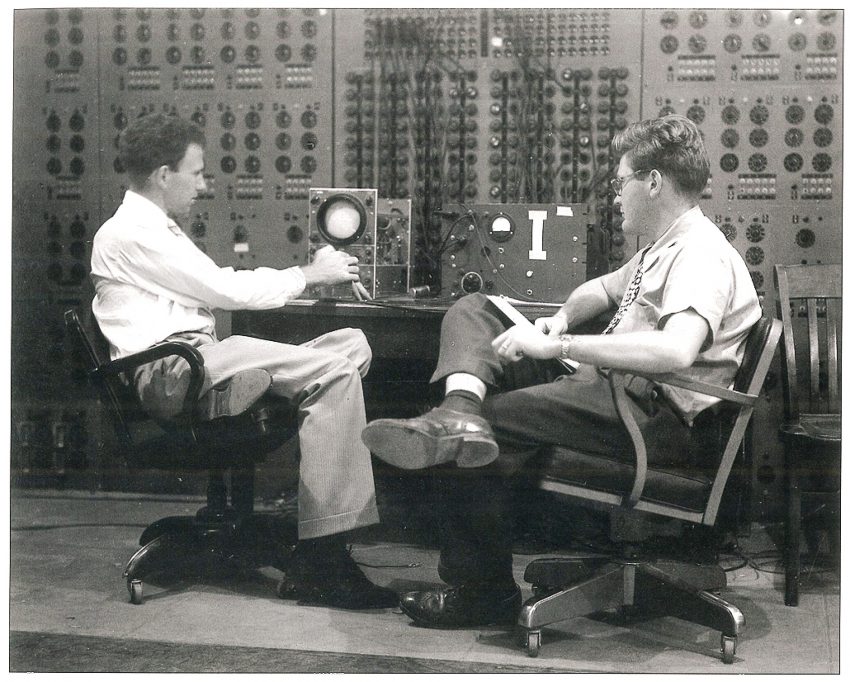 Dr. MacNeal and Robert Schwendler in the early 1960’s working on the NASA space program