When you think of a symmetrical structure, you most likely think of a structure that has one or more planes of reflective symmetry. Although there are other kinds of symmetry available in MSC Nastran, reflective symmetry is the only type that is discussed in this section. MSC Nastran also provides a series of special solution sequences that automates some of these other types of analyses. They are known as the cyclic symmetry features and are covered in Cyclic Symmetry, 577. If a structure is symmetric, then the size of your finite element model can be reduced, which, in turn, reduces the time and cost of your analysis. For each plane of symmetry that you have in your model, the model size can be reduced by a factor of approximately two. Figure 9-29(a) and Figure 9-29(b) illustrate structures that contain one and two planes of symmetry, respectively. In the first case, only half the model needs to be represented. In the second case, only a quarter of the model needs to be represented.

No special user interaction is required in the Executive Control Section or Bulk Data Section. Depending on the number of planes of symmetry, approximately one-half or less of the structure needs to be modeled. For the above frame model, only one-half of the model needs to be analyzed. 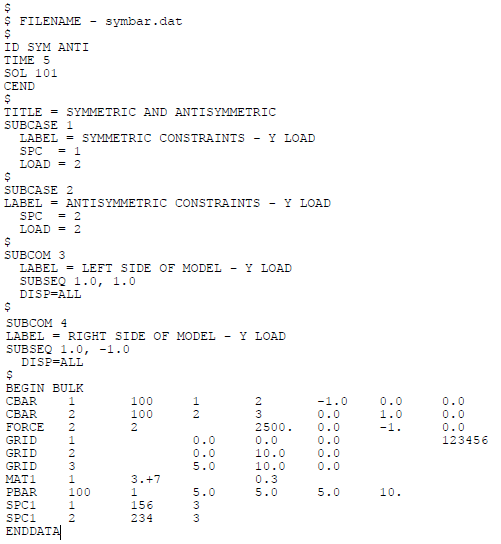 The third subcase is a “results combination” subcase. No boundary or load conditions need to be applied for this loading condition (see Modeling Guidelines, 341 ). This subcase produces results for the portion of the structure that you have modeled (the left-hand side of the frame in this case) by performing a linear combination of the first two subcases. This combination is achieved by adding 100% of the results for the first subcase to 100% of the second subcase using the SUBSEQ command. Note that in this case of results combination, the SUBCOM instead of the SUBCASE command is used.

The fourth subcase is also a “results combination” subcase. It produces results for the portion of the structure that you did not model (the right-hand side of the frame in this case). These results are achieved by substracting 100% of the results of the second subcase from 100% of the results from the first subcase. As in Subcase 3, the SUBCOM command instead of the SUBCASE command is used in this case. Once again, no load or boundary condition is needed for this subcase; this is an optional subcase. It is not required if you do not want to obtain results for the other half of the structure that you did not model.

In the past, when computers were not as fast as they are now, the use of symmetry to reduce the finite element model size was more popular than it is today. The advantage of using symmetry is obviously the reduction in model size. The disadvantage is that it requires more effort on your part and it is more prone to errors since you have to provide equivalent symmetric/antisymmetric boundaries and loading conditions to your model. In MSC Nastran, the use of symmetry is built into some of the solution sequences-they are known as the cyclic symmetry solution sequences (Cyclic Symmetry, 577). Similar approaches can be used with superelement analysis.

All of the content in this blog post has been directly extracted from the MSC Nastran 2013 Linear Static Analysis User's Guide.