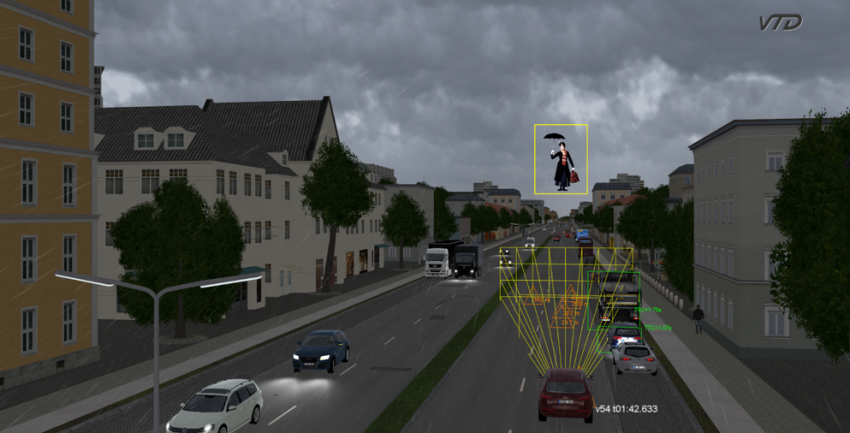 Just occasionally something happens that intersects with the real engineering world I inhabit and the domestic world of my home life…. Recently, some autonomous vehicle simulation colleagues and I got into a deep discussion about whether MSC Software’s VTD (Virtual Test Drive) ADAS/AD simulation toolset can simulate realistically poor daylight on a murky day, complex reflections of rain water in puddles, and people with umbrellas walking along a road. We simulated a woman carrying an umbrella on a rainy day and even had the person moving across the road and being detected by the virtual ADAS sensors on the front of a car. This got us arguing (as engineers frequently do) about whether or not VTD could simulate a character flying with an umbrella. Of course, Mary Poppins, beloved of my six-year-old daughter came to mind immediately. And, no surprise, VTD could simulate Mary and, indeed, it can be configured for whatever driving scenario that users can dream up because it is a world-class engineering Autonomous Driving / Advanced Driving Assistance System (ADAS) virtual test drive simulator.

But then we got to thinking of more realistic co-called ‘Edge Cases’, a phrase common in the Self Driving industry. An ‘Edge Case’ occurs at an extreme – usually at a maximum or minimum – operating parameter for an engineering system. Now, given that autonomous vehicles ultimately will have no steering wheels, and will therefore be totally dependent on sensors and AI (Artificial Intelligence) to ensure safe driving over all possible scenarios, this starts to make you think of all sorts of atypical situations that might happen just one time a year or perhaps once in a million scenarios, but could pose serious safety risks to Autonomous Vehicles. Self-driving cars will have to deal with all sorts of these weird scenarios …. such as kangaroos jumping across the road in Ohio! Yes, this could just happen as there are probably a few hundred marsupials in the wild across America today having been let loose by owners and interbreeding into small colonies.  And Kangaroos can be very unpredictable animals because they have the unnerving tendency of being in one location at one instant and then 12 feet away the next – just ask any Australian! This makes kangaroos problematic for self-driving car designers and a perfect ‘edge case’.

Now you know what I mean by ‘edge cases’, you can start to think of other ‘edge cases’ like maybe removals men carrying a mirror across a street from their truck in front of a self-driving vehicle, or perhaps children dressed up as dinosaurs ‘trick or treating’ at Halloween crossing the road in front of a self-driving car. Both of these are very rare instances each year, but are genuine ‘edge cases’ nevertheless that AVs will have to deal with in future. As humans we would recognize and deal with the situation through our innate abilities to judge such scenarios out of experience (or watching movies) and from our learnt memories as children and make a risk assessment and act accordingly. Somehow, the next generation of self-drive cars being dreamt up today are going to have to deal with these situations without being paralyzed and creating an unsafe driving scenario. Well, the good news is that VTD can pretty much allow users to put in everything conceivable for visualizing such ‘edge cases’. Just check out what my colleagues, Karthik Krishnan and Yijun Fan have simulated as an illustration of a rare problem I do recall from my time in New Hampshire – a not-too-clever bull moose on the road in front of your vehicle; a major safety hazard as any New Englander will tell you. 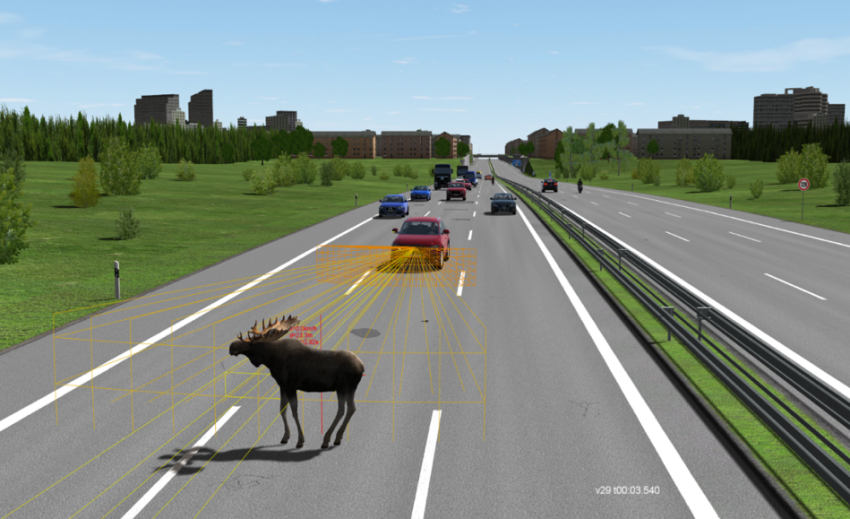 VTD’s photorealistic rendering of daylight at different times of the day and rainwater puddles on a winter day is state-of-the-art. Indeed, in autonomous and ADAS virtual test driving a major requirement is to have openness in the simulation software and data inputs being tool-chained together. Karthik and Yijun at Hexagon/MSC recently articulated the challenges and demands involved for autonomous driving OEM manufacturers, Tier 1 suppliers, start-up self-drive companies and AD regulators, in terms of software openness in AD/ADAS design. You can read their thoughtful White Paper at the link below entitled ‘Open Standards – Essential for Self-Driving? Validating Autonomous Vehicles Through Billions of Virtual Test Miles’.

If you want to know more about all the cool features in VTD for ADAS/AD simulation scenarios contact us and find out more.

And now off to fly a kite with a six-year-old.