Join us in Chicago, IL (May 14) or Boston, MA (May 21) for a free hands-on workshop on Adams/Machinery. More information can be found here >> http://pages.mscsoftware.com/adams-machinery.html 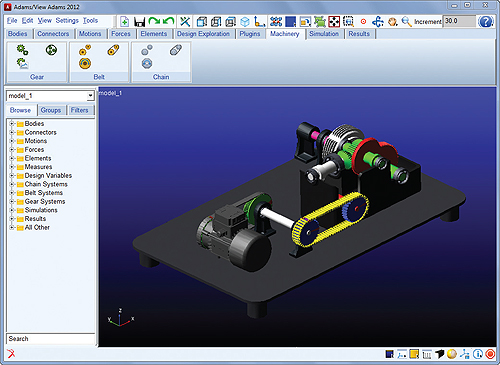 Adams/Machinery makes analyst-level simulation practical for the rest of us.

For motion, the kinematic tools included in many CAD systems are quite good at modeling motion driven systems with frictionless connections and idealized constraints. They work well when all the motion in a model is prescribed. But that’s not how real world machinery works. More often, you find force or torque driven systems, with slop and friction in the connections, and flexible bodies. To model these types of systems, you need to move beyond kinematics, to multibody dynamics.

Adams, from MSC Software, is the most widely used multibody dynamics and motion analysis software in the world. It’s incredibly capable software. MSC has recently released a new member of the Adams family, Adams/Machinery, which could very well make serious multibody dynamics analysis practical for use by design engineers, early in the product development cycle.

Adams/Machinery is a set of productivity modules, bundled into a single offering. It runs in the standard Adams/Studio environment (Adams/View, Adams/Solver, and Adams/Postprocessor), and can import geometry from most major CAD systems, or build a solid model of the mechanical system from scratch.

What sets Adams/Machinery apart from plain Adams is the capability for wizard-based modeling, and adjustable-fidelity simulation of common mechanical subsystems, including gears, belts, and chains.

Adams/Machinery allows designers and engineers to build functional virtual prototypes of machinery components and systems early in the design cycle, with a level of detail that allows them to perform meaningful analyses, long before they get to the stage of building physical prototypes.

Another benefit of Adams/Machinery is you can model gears, belts, and chains incredibly faster and easier than in Adams or other software like it. Yijun Fan, MSC Product Marketing Manager for Adams/Machinery, points out that belt systems that would take even a very proficient Adams user a week to create could be created by a typical design engineer in about an hour using Adams/Machinery.

Beyond mere modeling speed, remember that Adams/Machinery allows user-defined fidelity, to support the needs of the problem. The software does not use undisclosed simplifications.

While Adams has long been used in critical aerospace and automotive applications, the level of productivity and ease-of-use provided by Adams/Machinery makes it interesting for even relatively prosaic machinery design applications.

Learn more at our Free Hands-on Training in Chicago (May 14) & Boston (May 21) >> http://pages.mscsoftware.com/adams-machinery.html

Get Your Hands Dirty! – How to Run An Adams-EDEM Co-Simulation

In my previous blog post I introduced the Adams-EDEM coupling that allows engineers to realistically simulate how bulk...