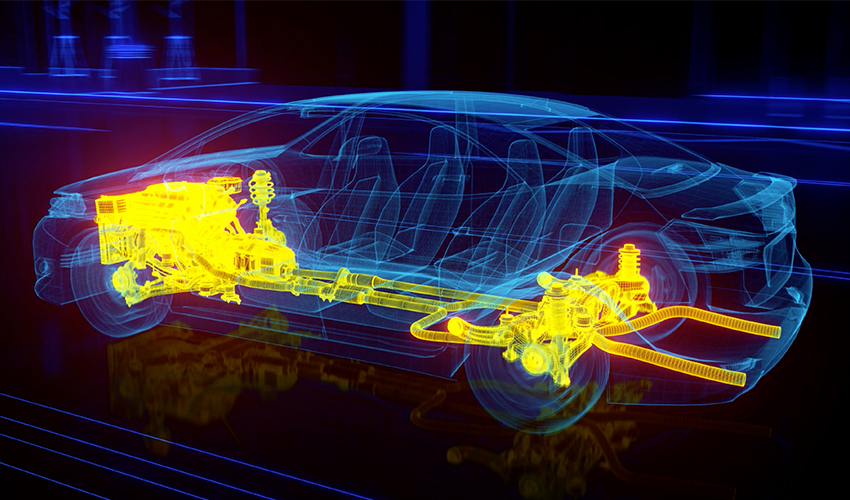 We continue our Real Time blog series with a focus on Applications of Adams Real Time. The previous blogs in this series can be found here (Blog1, Blog2).

Modern engineering systems are becoming increasingly complex and multidisciplinary. Consider the automotive industry, for example, a domain that has traditionally been mechanical engineering focused. Trends related to autonomy, electrification, and connectivity have necessitated the inclusion of more electronics and software, thus fundamentally transforming the industry. This transformation imposes a fundamental challenge when it comes to verifying and validating vehicle design. Electronic Control Units (ECU’s) that control, regulate and alter an automotive subsystem using embedded software have a myriad of inputs and outputs, which makes testing for standard and atypical driving scenarios a challenge. Furthermore, testing these subsystems on a fully assembled prototype is expensive and runs the risk of propagating issues far into the development cycle.

Hardware in the loop (HIL) testing technique provides a solution by connecting the real signals from an ECU with a virtual model of the system under test. HIL makes testing less dependent on prototype availability. Engineers can then test their systems as early and as often as possible, exposing potential issues upfront in the development cycle.

Since the goal is to test the ECU under realistic virtual stimuli, the model of the system needs to respond in real-time. Adams Real Time brings the time-tested benefits of Adams to applications, where a real-time model is required. 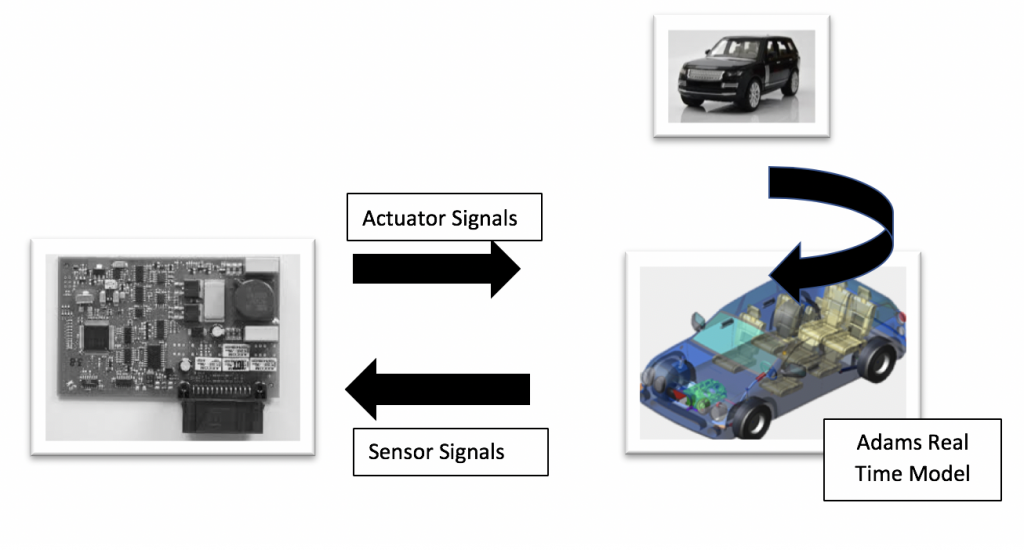 As shown in the schematic, a real time Adams model emulates the actual vehicle or vehicle subsystem and interacts with the real I/O from the ECU. The model resides on a real time platform that contains high performance processor technology and raid I/O capabilities. A more detailed representation of a HIL environment with an integrated Adams Ream Time model is shown below. 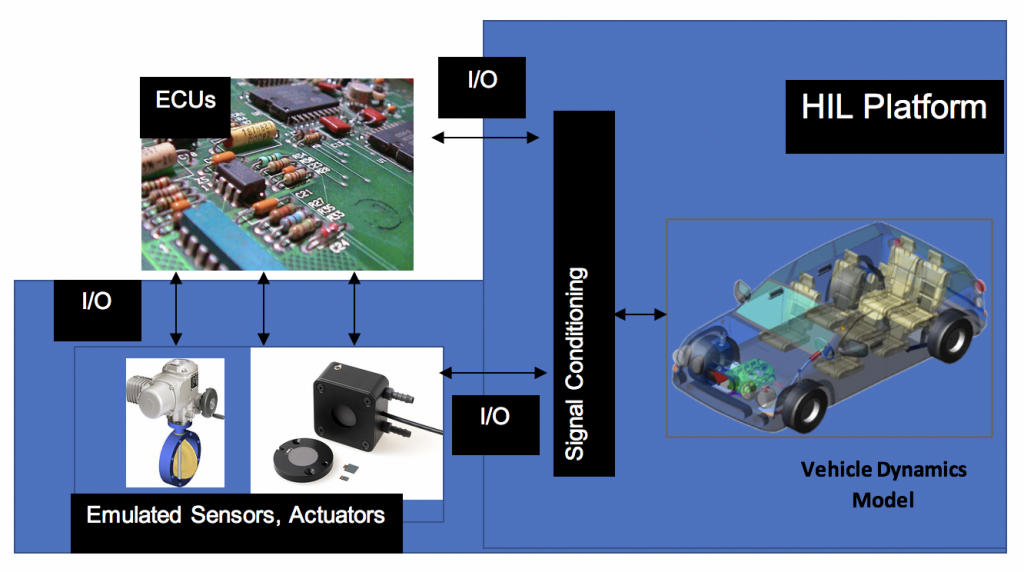 Processor boards run the Adams model in Real Time and simulate the vehicle states. The real time model is connected to the ECU via I/O interfaces and signal conditioning systems on the HIL platform. The model provides real sensor loads to the ECU, and the ECU, in turn, offers real actuator loads to the model through the I/O interfaces.

HIL provides a scale able and repeatable process for ECU testing and controls development. Since a virtual vehicle dynamics model is in the loop, engineers can test beyond the range of certain ECU parameters and safely investigate off-normal cases. Similarly, extreme events associated with failure can be investigated. For example, signal faults, e.g., open/shorted conditions, could be intentionally introduced between the model and the ECU to test for acceptable responses for these fault conditions.

The suggested usage of MBD modeling approaches, such as Adams, to simulate vehicle states in HIL is not novel. However, real-time compliant vehicle dynamics models for HIL integration have traditionally involved a low number of Degrees of Freedom (DOF), around 20. Such models are typically used to characterize the behavior of the vehicle via lookup tables. While these Reduced Order Models (ROMs) are a valid approach, with Adams Real Time compromising on the number of DOF’s is no longer a requirement. Readily available high-performance computing and advances in engineering simulation techniques have now made predictive higher fidelity real-time simulations possible, providing more valuable insights for controls development.

MSC Software has designed Adams Real Time to preserve the topology and parametrics of the MBD-modelled system in real-time applications. This makes it possible to maintain elements such as hardpoints, joints, springs, dampers, and bushings and make changes to the modeled vehicle configuration without the need to calibrate a new ROM for every change. As such, the model can capture higher frequency characteristics in the system responses and replicate real-world ECU testing scenarios. Since the Adams model is parametric, the ECU can be tested against different virtual vehicle configurations rapidly. More robustness, enhanced efficiencies! 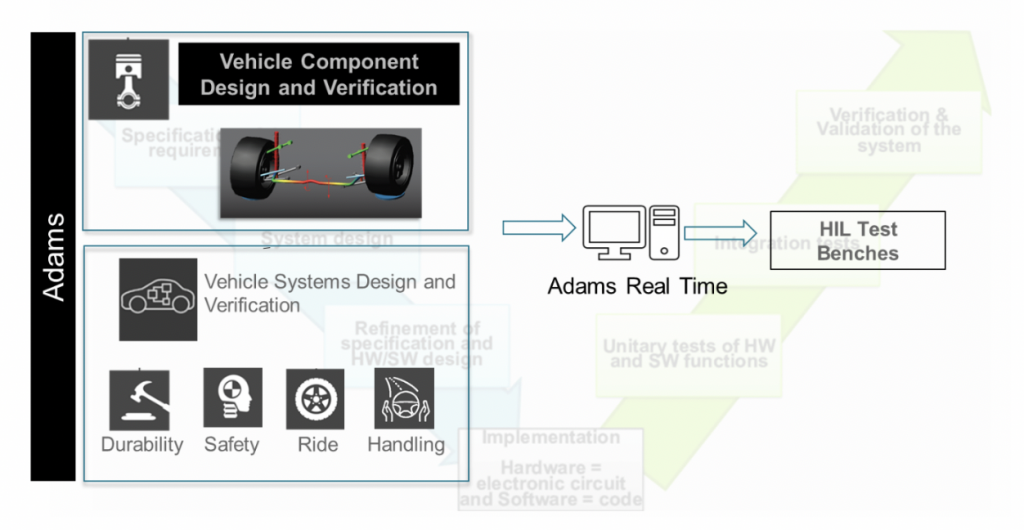 Adams is synonymous with vehicle systems optimization and is the prevailing modeling standard during the vehicle design phase. Adams Real Time now provides you the opportunity to use your existing vehicle modeling assets during the vehicle testing and calibration phases. Adopting a single modeling approach for both real-time and non-real time applications consolidates toolchains, provides consistency and eliminates error-prone model translations between different tools. This approach also makes it possible to validate control systems very efficiently and has the potential to remove weeks from a typical vehicle development program.

In upcoming blogs, we will expand on these Adams Real Time differentiators and benefits through actual vehicle applications such as stability control and anti-lock braking systems.